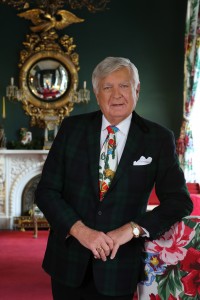 Carleton Varney is one of America’s best-known interior designers and president/owner of Dorothy Draper & Co. Inc., one of the oldest continually operating interior design firms in the United States. Named after the founder of the company- Dorothy Draper, who was the doyenne of interior design from the 1920’s to the 1960’s. The company’s design philosophy stresses the use of bright colors and the rejection of all that is impractical, uncomfortable and drab. In embracing this practice Carleton Varney continues the tradition of Dorothy Draper by being associated with the adventurous use of vibrant colors, floral patterns, and bold contrasts. Mr. Varney’s impressive roster of clients includes superstars from the worlds of entertainment, fashion, and business.

He decorated the Governor’s Mansions in West Virginia and Heartford, Connecticut, and was involved in the decoration of the U.S Ambassador’s Residence in Tokyo, Japan and in Dublin, Ireland. He restored and redecorated the Official Vice President’s Residence in Washington D.C. during the George H.W. Bush administration, and was the color consultant for the Carter Presidential Library and the consultant for several functions, parties, and State Dinners for visiting dignitaries at the White House during the Carter administration. He also redesigned and decorated the Carter residences in Plains and Ellijay, Georgia.

In addition to the decoration of numerous national and international private residences, the company has also decorated cruise ships and private plane interiors. Carleton Varney was the curator of the former presidential yacht, the USS Sequoia. In 2008 he also designed the Architectural Digest Green Room for the Academy Awards celebration at the Kodak Theatre in Los Angeles.

Mr. Varney’s versatility in design can be seen in the wide range of products that bear his mark, ranging from dinnerware, crystal, eye wear, home accessories, to scarves, including the 2017 Newbridge Silverware of Ireland home collection that bears his name. He has designed furniture collections for the Romweber and Kindel Furniture companies as well as for Ficks Reed.

Since 1962, he has been creating designs for Dorothy Draper Fabric & Wallcoverings, which grace the rooms of some of America’s and the world’s most beautiful resorts and residences. Mr. Varney also writes a weekly decorating column, “Your Family Decorator,” in the Palm Beach Daily News, also known as ‘The Shiny Sheet’.

Carleton Varney is the author of numerous books, mostly on decoration and interior design, and has also written a biography of Dorothy Draper entitled, “The Draper Touch.” He has penned two novels, “Kiss the Hibiscus Good Night” and “The Decorator.” In conjunction with the museum exhibitions on the High Style of Dorothy Draper at the Museum of the City of New York, The Women’s Museum in Dallas, and the Museum of Art in Fort Lauderdale (2006-2008) he published the book, “In The Pink – Dorothy Draper, America’s Most Fabulous Decorator.” He has also published “Houses in My Heart” a book that features his favorite design projects during the course of his career. Mr. Varney is often referred to in the media as Mr. Color, hence the title of his book, “Mr. Color – The Greenbrier & Other Decorating Adventures.” His latest book, “Decorating on the Waterfront” richly illustrates his work across the waters of the world.

Architectural Digest, in its January 2005 edition, named him as one of the 30 “Deans of American Design.” In 2015, the Las Vegas International Market awarded him the Design Icon of 2015.  He is a member of the Interior Design magazine Hall of Fame. He has also receive the Tommy Award, Shelby Williams Award and Restaurant and Hotel Design Platinum Circle Award for his interior designs, to name a few.

A native son of Lynn and Nahant, Massachusetts, he was educated at Oberlin College, Ohio where he obtained his Bachelors of Arts degree, and also studied at the University of Madrid, Spain. He obtained his Master of Arts degree at New York University. He also holds an honorary doctorate from the University of Charleston, West Virginia, and founded the Carleton Varney School of Art & Design in that institution. Carleton Varney is the proud father of three sons- Nicholas, Seamus, and Sebastian.

Please visit Carleton’s website at www.carletonvarney.com to shop for exclusive designs from the Carleton Varney and Dorothy Draper collection, as well as read his not-to-be-missed weekly decorating blog.

“Carleton Varney is arguably the country’s most in-demand… decorator.  He is certainly one of the best known”
– People Magazine

At @hpmkt? Check out new pieces in our #DorothyDr