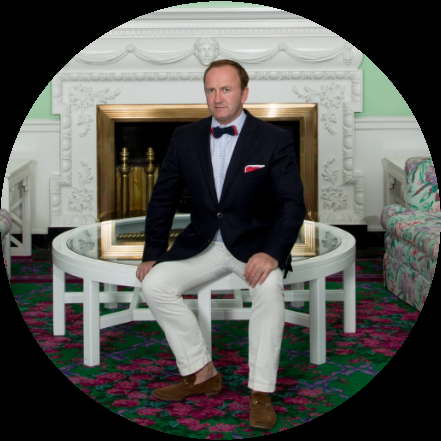 Brinsley Matthews is the Executive Vice President and Director of Design and Operations at Dorothy Draper & Company. Mr. Matthews is constantly creating new designs for our hotels, resorts, and private residences, as well fabrics, carpets, furnishings and lighting. He is also responsible for the firm’s global operations across four locations, and leads our Dorothy Draper Fabrics & Wallcoverings and Carleton Varney wholesale and retail businesses.

Since joining the Firm in London in 2007, Mr. Matthews has lead the design firm together with Carleton Varney, creating and executing acclaimed designs for numerous company projects, including:

Prior to joining the firm, Mr. Matthews was involved in his family hotel business.  Mr. Matthews also previously founded and operated his own furniture line, with manufacturing operations to-the-trade and three retail locations in Europe.  A man of many talents, Mr. Matthews was also a former race car driver competing mainly in Europe.  He is the author of Lands Shared, a book of poetry published by Seven Locks Press in 2007, and is the director and producer of documentaries.

Mr. Matthews studied Fine and Decorative Arts and Design at Sotheby’s Institute of Art, London and at Trinity College and University College Dublin.